Three chai tea latte refills, a cheese danish, and an adderall later, she and I sat alone in the KoreaTown coffee shop talking about Winnie-the-Pooh tattoos, The Wilhelm Scream live on KEXP, and forgiving black folk who aren’t yet tired of taking the high road. “The best way to describe the high road,” I told her after asking for the third time what the high road resembles, “looks like Atlanta on King’s birthday; far too many black folks there for the wrong reasons, and just a few other folk who came to see how it felt.”

The only other thing I remember about the R. Kelly sex tape aside from the look on the poor girl’s face when his Hennessy piss splashed on her lip, is a guest on BET saying, “R. Kelly will be okay. Black folks are a forgiving people. We seem mad now, but we’ll get over it like we always do.” I thought back to every time we hooped and hollered and broke things, then quickly forgave those whose face our faces were just inches from, thinking it would change who they were at their core. It never did. I was 18 or 20 when R. Kelly  had sex with that poor girl, and for the past 15 or 13 years, I’ve been taking note of every time we forgave someone who deserved our backs, not our hands.

The high road isn’t pretty, the view, unlike most hills and mountains, is awful, and you have to walk barefoot. Here come the busses, smelling of day old, cold wings, Suave lotion, and baby powder, full of those ready to remove their shoes and run down, arms open, smiling. Well, I’m not walking it. I’m not going to stand at a podium with Levi Pettit while he apologizes for being caught on tape saying I’m good enough to decorate his family’s plantation, but not good enough to learn the same histories and traditions he’s learned (although I have absolutely no interest in doing so). I won’t shuffle my feet like the Black man I met in Beaufort, South Carolina when my car broke down for those who are racist by definition. 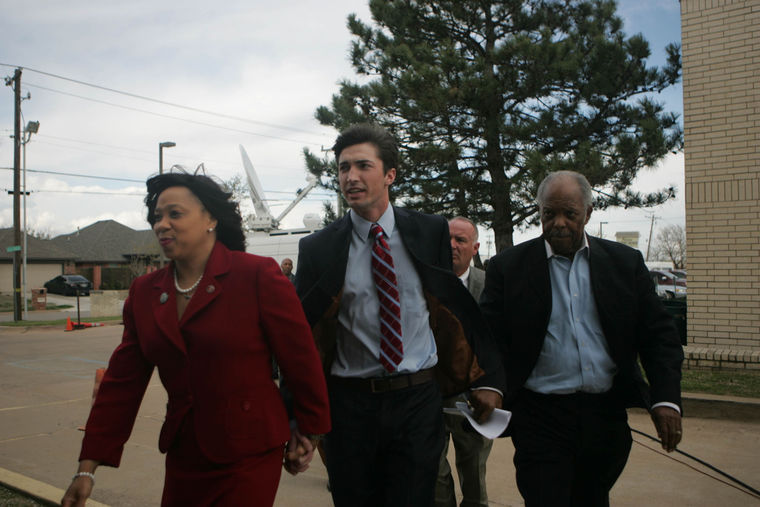 Perfected oppression. They’ve been practicing racism so long, it’s perfect. Hell, we’ve been providing cleanup services for racist white folks for centuries now. Double entendre intended (shoutout to ABC on Thursdays at 9pm/8CST). We should stand behind the young woman who sat on the bus and was brave enough to release the footage of Levi and friends saying he’d rather see a black man hang from a tree than eat with him in his fraternity house’s dining hall.

And here we are, with Oklahoma State Senator, Anastasia Pittman, a Black woman, cleaning up after the man who just a few weeks ago told the world men like her daddy have absolutely no value; Black men like Jonathan Capehart, opinion writer for Washington Post, who now also stands beside Levi Pettit, calling his apology “extraordinary.” Aren’t your feet tired and broken? Aren’t your hands, the same ones Common suggested you extend, in pain? You’re not tired of fixing plates, placing them on their table, then walking off to eat in the back with the dogs?

Perfected oppression. Pastor J.A. Reed, Jr. said, “We accept the apology of Levi, and we forgive him for the mistake he made.” What mistake is he speaking of? When Levi Pettit said “There will never be a nigger in SAE?” That can’t be it, because the words seemed to make their way from his brain to our ears with ease, and not immediately retracted. There were no mistakes. Only deeply rooted intentions. “Oh, there will be cameras at the church and we can get on national news,” is what I imagined Pastor J.A. Reed said shortly before his forgiving comments. The price of one’s integrity, manhood, dignity, soul.

“I’m grateful for him, his parents and for the courage they showed in being here today,” said Pastor Arnelious Crenshaw Jr. of Northeast Church of Christ. Well, I’m grateful for men like Pastor Arnelious Crenshaw, Jr. for showing some of us that perhaps the oppressors are still oppressing because all it takes to be forgiven after crushing the necks of hundreds of black folks is to ask three of them to forgive you, and they’ll talk to the rest. Hell, even Justin Bieber called us “Nigger,” and we saw how fast Usher shuffled and tapped to the mic to tell everyone his friend wasn’t racist.

The coffee shop closed at 3am and we finished the conversation in my car with, “I’m not accepting any apologies.”